Up-and-comer Chad Michael Collins was first considered for the lead role in the new film Sniper Reloaded because of a resemblance to Tom Berenger, the star of the original film. But it’s his talent that got him the gig. Sniper Reloaded is out on DVD and Blu-ray and I got a chance to chat with Collins about putting on the war paint, working with Billy Zane and some pretty cool upcoming projects. 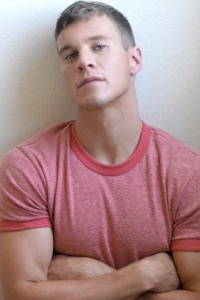 Here’s the deal: Chad Michael Collins plays Sergeant Brandon Beckett, a hotheaded infantry grunt and the estranged son of Berenger’s elite sniper Thomas Beckett. After finding himself on a UN peacekeeping mission in the Congo gone horribly awry, Collins’ Beckett works to unravel a cover-up surrounding the sniper-related deaths of his squad. Beckett immediately sets to make things right — with a little help from his friends, including Billy Zane, who reprises his Richard Miller role from the original Sniper and teaches him the way of the gun. Check out what Collins has to say about the film.

SheKnows: At what point did you become aware of the first film?

Chad Michael Collins: I remember watching the original Sniper as a teen; it was airing on cable, on TBS or something. The opening scene where Tom Berenger just materializes out of the foliage in his camo ghillie suit was so cool, as was the I-rescue-you-then-you-rescue-me storyline between him and Billy Zane. Being a huge fan of playing with GI Joes as a kid, seeing a movie like that makes you giddy.

SheKnows: Your name originally came up because of your resemblance to Tom Berenger. What was the audition process like?

Chad Michael Collins: Well, that story all begins with a little Syfy channel original movie I did called Lake Placid 2. The producer, Peter Nelson, thought I was a dead-ringer for Tom Berenger, and he was trying to get another Sniper movie going. At one point, about four years ago now, I was attached to an origins-story version of it, with me playing a young Thomas Beckett fresh out of basic and off to Vietnam in flashbacks. It got shelved, then it resurfaced over a year ago in its current form, so I went in and had a work session with my fantastic director, Claudio Fah, and the rest is history.

SheKnows: Where are we in terms of time? Give us a glimpse of the story.

Chad Michael Collins: Space, deep space. Where no one can hear you scream. Wait, that’s another movie [laughs]. Present-day. The Democratic Republic of the Congo. Sergeant Brandon Beckett and his squad of Marines are deployed on a UN peace-keeping mission to extract a Belgian plantation owner out of a rebel-conflict hot zone. There is an ambush, by a sniper, that kills everyone… except me. Hell-bent on revenge, and frustrated with bureaucracy, I set out to find the killer. Lucky for me, a cooler-headed Richard Miller (Billy Zane) shows up to convince me not to go all cowboy and get myself killed, but when I go AWOL anyways, he’s there to save my ass, more than once. Throw in a little superior officer romance, a creepy German colonel, and lots of majestic South African landscape and wildlife, and you’ve got a really fun, action-packed 90 minutes.

SheKnows: You have a number of scenes with a young girl (Kayla Privett). It was her first film. What advice did you give her?

Chad Michael Collins: Kayla was great! She was the armorer’s (a great guy and former ex-soldier named Pete Smith) daughter, actually. Not only was this her first film, but her first time acting. Ever. And she had to bring the emotion. I was impressed, thoroughly. But I understood how that could have been intimidating for her, so we spent a lot of time together, just talking and hanging out on set, running lines, and rehearsing. With dozens of people running around in the background, and in between takes, it can be very distracting, right up until “Action!” So my advice to her was just to focus on me, and pretend nobody else existed. Outside of that, I told her to get into class and get an agent, because she could start building a career! She was adorable and sweet, and she did a great job. 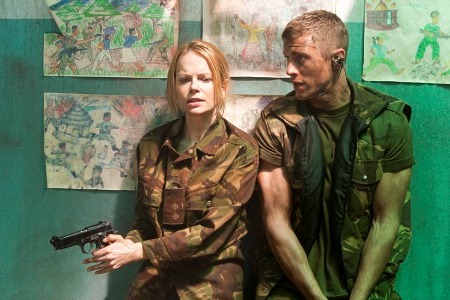 SheKnows: Talk a bit about the weapons training. Are you a good guy to hang with during the zombie apocalypse?

Chad Michael Collins: Well, I grew up around guns, as I come from a family of hunters, and was a pretty decent shot. I’ve also taken up archery recently, so I’d say, should the zombies come, I’m not a bad guy to have watching your back. The nice part about doing films is that you aren’t required to actually hit anything with a live round; you just have to point, aim in the general direction, and shoot blanks (insert witty reply here). But the devil is in the details, and I worked tirelessly to make sure that I got everything from holstering, locking, loading, aiming to firing as realistically soldier-like as possible. I was like a gnat, constantly hovering over the shoulders of our technical adviser, a Russian ex-sniper, and our armorer and his team, asking questions, learning the jargon, getting down the subtle nuances. We had almost no training before we started shooting, so I picked up everything on the fly. Those guys gave me a real education.

SheKnows: What was it like working with Billy Zane? Was he welcoming?

Chad Michael Collins: Billy was a gentleman and a scholar. He was incredibly open and accommodating, while also bringing a wealth of acting experience to the set. We hit it off from day one, where we met in the kitchen of the manor house we were staying with. We hung out, made some good eats, had a few beers and talked shop straight away. Dude is a great cook, by the way. But on set, that’s where his veteran leadership was key; for every scene, Claudio (our director), Billy and I would form this little brain trust and play with it to make it as believable and real as possible. He brought a sense of gallows humor to the equation that makes Reloaded a lot more fun.

SheKnows: You got to film in a gorgeous country… the landscape, the waterfalls… give us a taste of South Africa. What did you guys do on your off time?

Chad Michael Collins: South Africa was breathtaking, really beautiful. I was a crazy working fool on this film, since I’m in 97-percent of the scenes, so I didn’t have many days off, but I did take in some really cool things unique to the country: a white lion reserve, a monkey sanctuary, a museum featuring the fossils of our most ancient human ancestors ever discovered. We were on location in an area called the “Cradle of Life,” where the first humans originated from — pretty incredible history. I also got to tool around Johannesburg and see Mandela’s mansion. But the great part about shooting on location was that we were in a game farm reserve where the wildlife just ran free, everything from elephants to giraffes to zebras to wildebeests. I was petting warthogs some days; I figured, something that ugly must need some love…

SheKnows: You’ve been doing some TV work lately. Can you talk about being part of the CSI juggernaut?

Chad Michael Collins: Yes, I’ve put together a nice string of TV guest spots of late, starring on NCIS and CSI: Miami already this year. I also did a small role on CSI: NY as a rookie cop last year. The biggest difference between doing an established, primetime show and a lower budget feature like Sniper is that you’re stepping into a well-oiled machine. They know what they’re doing, the series regulars are pros, and you’re there to make them look good. That’s your job. Of course, they understand that to make a great episode, the guest cast has to look good too, and I found everyone I worked with — Gary Sinise, Mark Harmon, David Caruso — to be incredibly complimentary and welcoming. There’s a reason why those guys are stars, and it’s because they know when to lead and when to let someone else lead, all the while working to make each scene as good as it can be. Mark Harmon made such an impression on me, coming in with a lot of respect and friendliness, and he had the air of an old football coach to him; he just has something about him that makes you want to play well. I’d run wind sprints for that guy. My CSI: Miami episode (Caged) was a lot of fun because I got to do three days of fight choreography, playing a champion MMA fighter. They threw me in with an actor/stuntman and former UFC fighter (Roman Mitichyan) as the challenger, which was exciting for me because I’m a huge fan of mixed-martial arts, and practice it casually. The episode is up on CBS.com, so people can still watch if they missed it.

SheKnows: When we spoke recently, you told me a bit about Rock Barnes: The Emperor in You. Details! This isn’t exactly a role we’d expect!

Chad Michael Collins: Yeah, Rock Barnes is a complete 180 from Sniper. It was really fun, a mockumentary that merges Spinal Tap with a Tony Robbins seminar. I play a straight man posing as a flamboyant gay consultant to Rock Barnes (Broken Lizard’s Erik Stolhanske), a completely oblivious narcissist and borderline alcoholic. Basically, I’m on his payroll to flatter his ego with the reassurance that the gay community loves him. And, of course, to make sure he looks fabulous. A very funny script from first-time writer-director Ben McMillan, and one of those true labors-of-love indie films that is going to make a lot of people wet their pants when they see it. And if you are among those people, well, it’ll be our little secret.

SheKnows: Anything you can tell us about The Summoning?

Chad Michael Collins: I don’t have many details about The Summoning, other than that it’s a supernatural horror-thriller about the legend of Bloody Mary, the mirror witch. I’ve been attached to the project for a while. We’re set to shoot this summer, and from what I remember of the script, it’s heavy on the horror and the blood, which is about right for a genre film. I see they’ve got Robert Wagner attached as well, and I love working with veteran actors because you hear the best stories and can learn so much just by watching. I’m eager to see how he stacks up to Mark Harmon!