The fast cars and hot guys of Fast Five revved their engines and raced to the top of the box office this week, taking down Rio in the process. 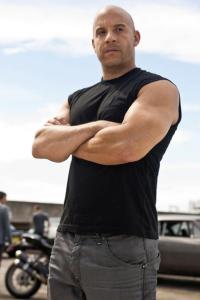 Rio’s two-week box office reign has come to a screeching halt thanks to the Fast and the Furious’ latest chapter — Fast Five.

Fast Five came across this weekend’s box office finish line with a stellar opening of $83.6 million.

According to early numbers, the flick’s whopper of an opening puts it in the prime spot to take over the title of this year’s largest opening thus far — a title that Rio, starring Anne Hathaway, was hanging onto ever so proudly.

Fast Five also set another standard in the box office world — best debut in April. Not just in recent years, but ever!

Rio still had a respectable run, taking the number two spot this week with another $14.4 million to add to its take.

Other box office showings this week included Tyler Perry’s Madea’s Big Happy Family in the third spot with $10.1 million, Water for Elephants in fourth with $9.1 million while the teen movie Prom rounded out the top five with $5 million.

Hoodwinked Too! didn’t fare as well as hoped, coming in at number six with $4.1 million. Soul Surfer and Insidious took spots seven and eight with $3.3 million and $2.6 million each. Hop and Source Code rounded out the top 10 with $2.5 million and $2.53 million.

Did you take in the action of Fast Five this weekend? What did you think of its showing? And congrats to Universal for their highest opening weekend gross of all time!