The Vampire Diaries threw us for a loop last week with the werewolf bite of Damon and the newly turned vamp Jenna! With the sacrifice upon us, what else could they possibly shock us with?

And so it begins — the long awaited sacrifice that The Vampire Diaries has been building up to all season! The name of the new episode, The Sun Also Rises, lends to the fact that something bad is going to happen — but out of darkness there can be light. We’re not sure if we like the fact that someone could be killed off, but we’ll see. 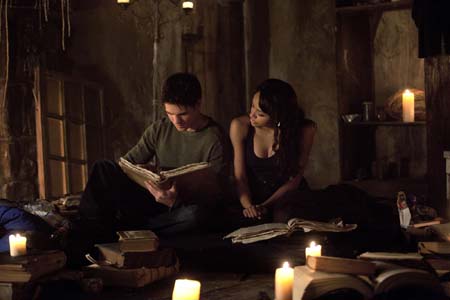 The Sun Also Rises picks up with the full moon. Elena (Nina Dobrev) struggles with preparing herself for Klaus’ (Joseph Morgan) sacrifice ritual while dealing with the new information that Jenna is in transition.

Someone also gets set to take on an “unexpected act of courage” while Tyler (Michael Trevino) deals with his second werewolf transformation.

Damon (Ian Somerhalder) is forced to tell Stefan (Paul Wesley) about some news that they have to face head-on. Could this be the news of the werewolf bite Damon received in last week’s episode? If you remember correctly, Damon was forced to put Rose out of her misery after she received the same type of bite.

The Vampire Diaries is definitely not going to cheat its fans out of a fabulous last few episodes, so we must prepare for the twists that are about to happen. Something tells us, not even our favorite characters are safe. Don’t forget to check out SheKnows’ exclusive interview with Joseph Morgan, the man behind Klaus!