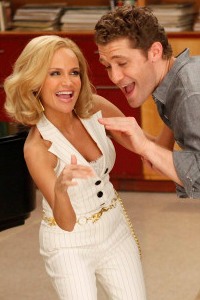 Everyone loves a juicy rumor and Glee is no exception. Rumours gives us a little taste of the gossip mill at McKinley High while bringing back an old favorite — April Rhodes (Kristin Chenoweth).

Sue Sylvester (Jane Lynch) decides it’s her duty to resurrect the McKinley High newspaper, which sets off a few stories that may or may not be true. Here come the rumors! The best part? The previews show Sue Sylvester going undercover as a few different characters — including a David Bowie look alike!

After Finn (Cory Monteith) and Rachel (Lea Michele) orchestrate a stakeout, they bring some news about Sam’s (Chord Overstreet) family to light. Will it be true or just another rumor?

With Glee closing in on the big prom episode, all Gleeks are on deck to try and figure out how it will go down. Weigh in on how you think the final episodes of Glee are shaping up. Don’t forget to check out Rumours on Tuesday night. Did you ever start a rumor in high school? Tell us, we want to know!