The world now officially knows a wee bit too much about actor Orlando Bloom. The actor and husband of model Miranda Kerr admits that he peed in a bottle during the birth of their son, so as not to miss a single moment. 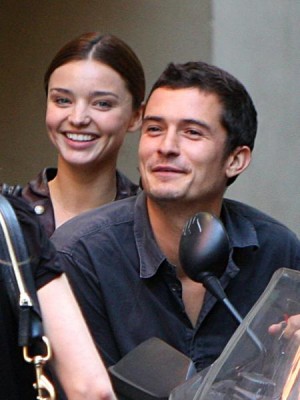 Orlando Bloom divulged his pee bottle secret to Ellen DeGeneres during a recent taping of her show. Explaining what happened during Miranda Kerr’s 27-hour labor he recalls, “I was like, ‘Honey, I have to go to the bathroom.'”

“[She said], ‘Someone get him a bottle!’ … Sorry, too much information,” Orlando laughs, “Especially on TV!”

Ellen remained unphased by the pee bottle story, assuring Orlando, “No, not really that means you’re devoted. You really stayed there the entire time!”

Orlando Bloom remains both devoted and proud of his wife and son Flynn. Miranda, who shared this picture of herself breastfeeding son Flynn on Twitter Thursday, looks incredible, a fact that hasn’t gone unnoticed by her husband. 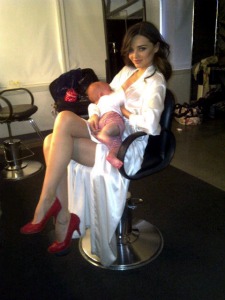 Miranda wrote on her blog in January, “I intend to breastfeed for as long as I can. My breast milk will give our little Flynn the nutrition he needs for his continued healthy development and to all mums out there I am sure you will make the right choice for you and your baby.”

Speaking of Miranda’s return to work just a few months after Flynn’s birth Orlando commented, “She is a little insane.” Ellen DeGeneres then asked, “Why did you put her to work right away? Can’t she stay home with the baby for a little while?”

At a loss for a reasonable explanation, Orlando Bloom joked, “Like I said, she’s off her own mind.”