If you were trying to downplay a pregnancy, announcing it the night before the royal wedding is one way to do it! Mad Men actress January Jones quietly announced she was pregnant and expecting a baby this fall. One bit of news she left out? The baby daddy! 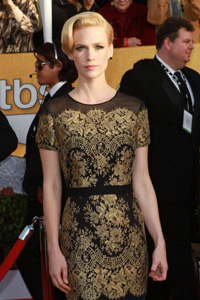 “January Jones is happy to announce that she is expecting her first child this fall,” she told People. “She’s really looking forward to this new chapter in her life as a single mom.”

It is interesting that her rep wanted to make it clear that the 33-year-old actress would be raising the baby herself, without the involvement of the dad.

So, who is the dad? Jones was dating Saturday Night Live star Jason Sudeikis but they split in January after six months of dating. He is the front-runner for the dad, however, maybe Jones started seeing someone else which caused the couple to break up?

Did she reunite with an ex-boyfriend? If that is the case, she has dated Adrien Brody, Josh Groban and Jeremy Piven. Could it be a Mad Men co-star? Or an actor from her recent film, X-Men: First Class?

Baby daddy drama aside, we will also be interested to see how Mad Men handles her pregnancy for the upcoming fifth season of the show.