The royal wedding has been the talk of the town (or actually the world!) for many months — and all the build-up reached its peak this morning as Prince William married Kate Middleton. How many guests attended the royal wedding? How many viewers tuned in to see the now famous kiss? Find out the astonishing royal wedding stats!

Royal wedding fever has struck! It seems like the entire world was watching as Prince William married Kate Middleton, a commoner turned duchess. 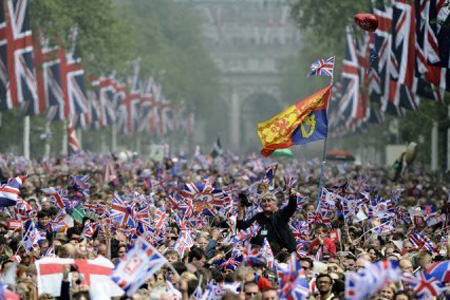 Although my invitation to the royal wedding was lost in the mail, 1,900 guests were invited to watch history being made in person inside Westminster Abbey. Sources reveal that 400 of the guests were close family and friends, as well as celebrities including Victoria and David Beckham and Elton John. Noticeable snub? President Obama!

Get more details on the royal wedding guest list here >>>

Fans and well-wishers gathered along the wedding processional route and authorities estimate that number at an astonishing one million people! And 500,000 of those people were present at the couple’s first balcony appearance.

Viewers didn’t seem to mind the early start time in the U.S., as over two billion worldwide tuned in to watch the royal wedding on TV. Watch parties at bars and restaurants (and in PJs at home, as was the case for Tori Spelling) were happening all over the world!

The royal wedding absolutely dominated social media! In fact, one source estimated that 1.7 million people tweeted by the time they were married — that comes out to 13,000 tweets per minute! Wedding-related tweets were responsible for 71 percent of all tweets!

Tell us: Did you tune in or tweet about the royal wedding?