Prince William and his new bride Kate shared their first public kiss on the balcony of Buckingham Palace — then thrilled the crowd with a second smooch!

It is a kiss that will be seen ’round the world for generations to come. Prince William thrilled the crowd when he kissed his new bride Kate on the balcony of Buckingham Palace — but if you blinked you would have missed it. 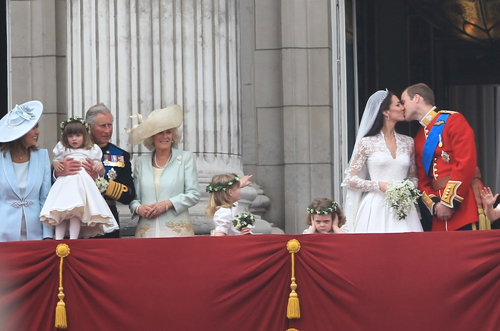 After nine years of near-zero public physical contact between the couple, they shared not just one but two kisses in front of a cheering crowd nearly an hour after the conclusion of the royal wedding ceremony.

The couple appeared on the balcony with the wedding party, their parents and the Queen and Prince Phillip. After a word from Wills they shared a quick peck, then another at Kate’s prompting after the crowd began to chant.

At least one person was less than thrilled by the kiss. Look at that utterly unimpressed little bridesmaid!

The happy couple will spend the rest of the day partying their royal butts off — and smooching some more in private.