Prince William and Kate Middleton have been bestowed new titles by the Queen celebrating the place where the happy couple first met.

Prince William and Kate Middleton will take the titles Earl and Countess of Strathearn, a Scots title in honor of the place they met nine years ago. 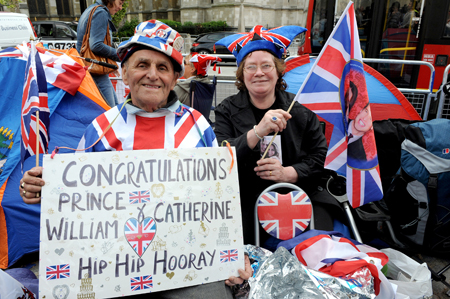 Strathearn, in the Perthshire area of Scotland, is near St. Andrews, the university where Wills and Kate first met and fell in love.

The title originated in 1357 when it was bestowed upon Robert Stewart, High Steward of Scotland. It was last used back in 1943 by the great-grandson of Queen Victoria, Alastair Windsor.

But wait, there’s more! The couple gets two bonus titles: Duke and Duchess of Cambridge and Baron and Baroness of Carrickfergus, which is very fun to say.

Charles Kidd, editor of Debrett’s Peerage and Baronetage (the giant tome that keeps track of all British aristocrats), says the titles are a perfect fit for the royal couple.

“It goes right back into the medieval years of the royal family. Richard, Earl of Cambridge, was grandfather of Edward IV.

“The first Duke of Cambridge was the seventh son of George III and a chancellor of St. Andrews University in Scotland where William and Kate met.

“It’s also good that the Prince becomes Earl of Strathearn and Baron Carrickfergus — as he is Prince William of Wales, that means everyone is included.”

While of course the rest of us will persist in calling Kate Middleton Princess, she officially will not take that title just quite yet. Remember, her father-in-law is the Prince of Wales. It will not be until Charles ascends to the throne upon the death of his mother and passes the Prince of Wales title to William — if he wants it — that Catherine will be formally styled Princess, not immediately after the royal wedding.