The Vampire Diaries gave a beloved character a werewolf bite and turned an unsuspecting person into a vampire this week. It’s just another day in Mystic Falls!

Tonight’s episode of The Vampire Diaries, The Last Day, was like being on a Six Flags roller coaster — just when you thought you could catch your breath, another twist was thrown your way! Stefan and Elena got romantic and it was intense! 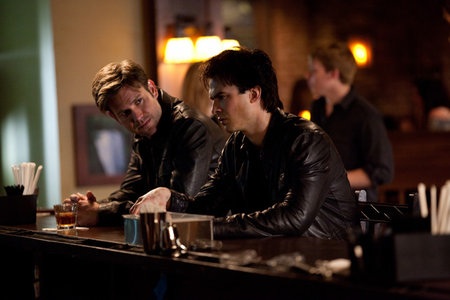 The Last Day picks up right where The Vampire Diaries left off last week — trying to save the beloved Elena (Nina Dobrev). Damon, Stefan (Paul Wesley) and Elena learn that Klaus (Joseph Morgan) will have to practically drink the life out of Elena before the curse is broken. Elijah (Daniel Gillies), however, has a new plan to help — a special elixir that will put the life back into her. Damon isn’t so convinced, but Stefan hears him out in hopes of keeping Bonnie (Katerina Graham) from channeling all that witchy energy — energy that may kill her in the process.

Klaus’ witch forces Mrs. Lockwood to call a missing Tyler (Michael Trevino) and tell him she was in an accident — then oops, the witch pushes her down the stairs. The plan? To get Tyler to come home. Why? Probably to get him to be part of the sacrifice. It works — Tyler shows up, but with Jules right on his heels. Here’s a shock: Jules is actually one of Klaus’ helpers.

Meanwhile, Alaric (Matt Davis) and Jenna come face-to-face for the first time and all is forgiven. Alaric has one last message from Klaus — the sacrifice is going down tonight!

In probably one of the biggest twists of the episode, Damon (Ian Somerhalder) makes Elena drink his blood to keep her safe from dying! You know what that means! She’s on her way to vamp city if she dies in the sacrifice! He has lost it! That one moment could change his relationship with her forever, not to mention the one with his brother! Of course, Stefan freaks out on Damon and an epic battle ensues that ends with Stefan getting stabbed.

Damon then meets the modern-day Klaus at the Mystic Grill while nursing his fight wounds with a stiff drink. After a nice exchange of words, Damon decides that with Alaric’s help he’ll take the werewolf out of Klaus’ plan so he can’t perform the sacrifice. Yeah, this is not going to end well. 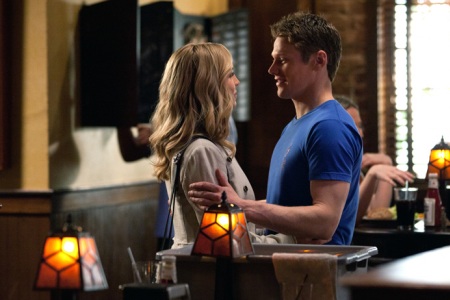 Hell-bent on getting the sacrifice done, Klaus kidnaps Caroline (Candice Accola) and Tyler and puts them in the tomb. It’s Damon to the rescue — again! But here’s where it gets really good: Damon is about to fall prey to Klaus’ witch, but Matt steps in and shoots him! He had a change of heart about teaming up with Caroline’s mom! But here’s the bad news: After Damon silences Matt for the moment, he finds wooden bullets — he’ll have to figure out why later. Damon makes it in time to save Caroline and Tyler, but Tyler has to lock himself in the old cellar before his transformation.

In romantic news, Stefan takes Elena hiking so they can talk about what Damon did and her feelings about it. They talk about the good and bad about being a vampire and Elena admits she never wanted to become one — ever! She wanted to grow old and have kids. It’s really a heartbreaking scene.

Klaus finally shows up to claim Elena but she and Stefan give him a run for his money. They don’t let on that she is on her way to being one of them.

With the full moon on the brink, Tyler wasn’t able to make it to the cellar in time and it looks like Damon got a slight bite, which means bad things for the vamp! How can this possibly end well? He manages to make Klaus aware that he can’t proceed without Tyler and Caroline — but it doesn’t matter. Klaus has a backup plan. That plan is called Jules and Jenna! Klaus turned Jenna!

Was your mind completely blown by this week’s episode of The Vampire Diaries? The Last Day sure threw us some curveballs. Tell us what you think as we get ready for the last two episodes of the season.