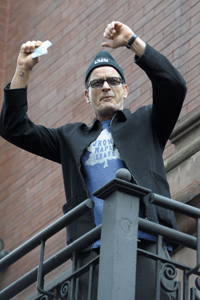 Apparently, Chuck Lorre plans to “reboot” Two and a Half Men, giving former Sheen co-star Jon Cryer a significant role. Additionally, sources say Lorre intends to add a new character, although there’s no word on who will play the newbie.

Word has it that Charlie Sheen still wants to return to Two and a Half Men, despite the fact that he’s quite busy touring the U.S., delivering his self-proclaimed “winning” stand-up routine, My Violent Torpedo of Truth. And, of course, there’s the little matter of that $100 million lawsuit.

Regardless of whether Sheen really wants to return to Two and a Half Men, Hollywood Reporter notes that isn’t happening: “Lorre is said to remain uninterested in meeting with Sheen, and Warners sources are adamant that Sheen will not be invited back.”

So, what’s to become of Two and a Half Men? The speculation is that it will, in fact, be back for a ninth season, although not everyone agrees. I guess we’ll have to wait and see.

In the meantime, it would be sort of fun to hear Sheen’s take on it — maybe on a UStream video while he’s inhaling cigarettes through his nose. Or not.

If Two and a Half Men does return for a ninth season without Charlie Sheen, will you watch?