The new trailer for Transformers: Dark of the Moon just hit the net and it’s full of explosive goodness. And Autobots. And Decepticons. We’ve even got a Transformers super-fan to break it down for you.

I’m going to admit that I didn’t love Transformers: Revenge of the Fallen. I know I was largely alone in that. Most critics panned it as a casualty of the writers’ strike. Most moviegoers loved it. Michael Bay recently called it crap. But I’ve been a fan of those little plastic cars that changed into robots since I was a kid. I was the only girl on my block to own Soundwave. And after this trailer, I have a feeling I’m about to be sucked right back into robot fangirl heaven. 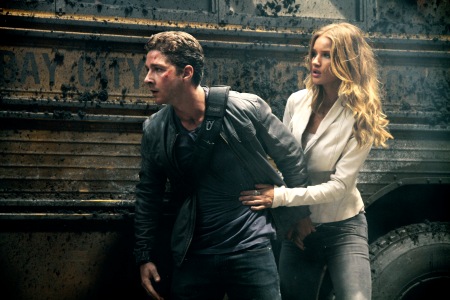 The new trailer for Transformers: Dark of the Moon was just released online and it looks incredible. We got to see the moon landing and the invasion of Chicago in the earlier pieces, but here we get explosions, story points, brand new Decepticons, a snake-like robot pulling a python on a skyscraper and a look at Rosie Huntington-Whiteley, who famously replaced Megan Fox after her not-so-nice comments about Michael Bay. Optimus Prime says that the humans lied to them — seriously humans, you don’t lie to giant robots that can squash you like bugs. Just saying.

I spoke to Transformers super-fan Davin Cleary about some of the characters we might not be able to pick out as casual viewers. He said what we see crashing on the moon is “The Ark,” a ship that contains Sentinel Prime (not seen in the trailer), a legendary warrior and predecessor to Optimus Prime, who was thought to be lost. Post invasion we see “‘Jetwing Optimus’ basically wearing the dismembered corpse of Jetfire (first a Decepticon, later an Autobot according to the Transformer mythology — it’s complicated) on his back charging into battle against the Decepticons.” He picked out Laserbeak (Decepticon) and Ironhide (Autobot), and an exploding Starscream (Decepticon). He said, ”The trailer was great and it got me pumped for the film.” He wasn’t super impressed by Huntington-Whiteley, but said that since we didn’t hear any dialogue, it was too early to judge.