The royal wedding program was released and it featured the wedding ceremony details, including vows and music — and a beautiful new portrait of Prince William and Kate Middleton.

The new black-and-white portrait of Prince William and Kate Middleton shows the couple smiling in white button-front shirts, looking relaxed and happy. Quite a difference from the stuffy photos taken in the past of the royal family! The photo is featured in the royal wedding program and was taken by famed photographer Mario Testino, who also took their official engagement photo. 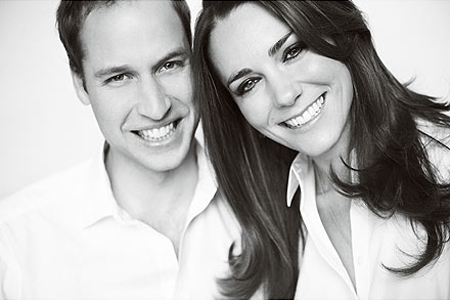 The 28-page program can be purchased for two pounds in London and contains details about tomorrow’s ceremony, as well as a message from William and Kate to their fans.

“We are both so delighted that you are able to join us in celebrating what we hope will be one of the happiest days of our lives. The affection shown to us by so many people during our engagement has been incredibly moving and has touched us both deeply. We would like to take this opportunity to thank everyone most sincerely for their kindness.”

The program also lists the music that will be played during the wedding service at Westminster Abbey, including the hymn Jerusalem by William Blake and the Welsh rugby anthem Bread of Heaven. Kate will walk down the aisle to I Was Glad by Sir Charles Hubert Hastings Parry.

The vows are traditional, however, Kate will not promise “to obey” which Princess Di also omitted from her vows.

Prince William will say the following to Kate, and she will recite the same back: “I, William Arthur Philip Louis, take thee, Catherine Elizabeth, to my wedded wife, to have and to hold from this day forward, for better, for worse; for richer, for poorer; in sickness and in health; to love and to cherish, till death us do part, according to God’s holy law; and thereto I give thee my troth.”

More on the Royal Wedding: