Next time you’re facing the possibility of spending the day in a court hearing, remember the Oprah jury excuse. Amazingly, a woman has been dismissed from the case of Illinois Governor Rod Blagojevich by telling the judge she has a ticket to one of the final tapings of The Oprah Winfrey Show. 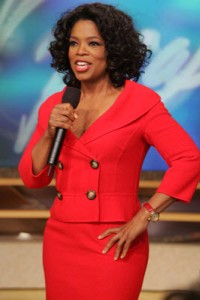 The judge overseeing the retrial of former Illinois Governor Rod Blagojevich has released a woman from jury duty, seemingly due to the woman’s possession of a ticket to one of Oprah Winfrey‘s final shows.

Prosecutors and defense lawyers agreed to let the woman known as Juror 137 out of her duties on Wednesday, but have not publicly discussed their reasons for doing so.

Blagojevich, who is facing corruption charges, had something to say about the lucky woman. “I’m very happy that that juror was dismissed from the jury pursuant to her request so that she can actually go and do what is a once-in-a-lifetime thing and that is see The Oprah Winfrey Show.”

A gutsy reporter asked Blagojevich if he thought the Oprah ticket was “golden,” making a reference to one of the phone conversations recorded by federal agents where Blagojevich said his ability to appoint someone to Barack Obama’s vacated Senate seat was “[expletive] golden.”

Unfortunately for Blagojevich he neither has an Oprah ticket, nor will it get him out of his own trial. Jury selection is set to continue on Thursday and opening statements for the trial are expected to take place on Monday.

We all knew Oprah was powerful, but does this border on ridiculous?

Paris Hilton escapes attack, boyfriend Cy Waits not so lucky
Lindsay Lohan: Morgue and toilet duty
Beyonce isn’t the only celebrity to drop a parent as a manager