Katy Perry may be a California Girl, but she’s currently in Australia, finishing up her tour. Oh yeah, she’s also busy suing a magazine for allegations that she cheated on hubby Russell Brand with record producer Benny Blanco. 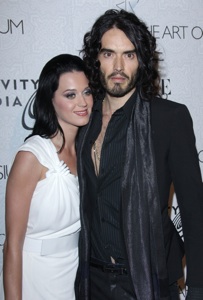 Katy Perry filed a lawsuit against NW Magazine for an article it published last month, stating she had an “intimate relationship” with Benny Blanco. Perry may sing about Fireworks, but she insists there were none with Blanco.

According to the Daily Mail, in a writ filed against NW Magazine’s publisher ACP Magazines, Perry asserts, “By reason of the publication of ?the article, the plaintiff (Perry) has been gravely injured in her reputation and feelings (and) has suffered distress, embarrassment and humiliation.” ?

And here we thought being out in public with Russell Brand could cause someone to experience embarrassment and humiliation.

Perry says that she doesn’t know either of the sources who provided the info for the story — one person named Angela Sumers, who is supposedly a friend, and another person named Marlon David.

Isn’t the term “friend” sort of a loose one when we’re talking about celebs? I mean, Beyonce and I are besties, even if she doesn’t know I exist.

Sources state the lawsuit could be worth six figures. (Please, please, please, somebody accuse me of cheating on my husband in a magazine.)

Seriously, though, we like the California Girl and if she was loyal to Brand, being accused of cheating isn’t right. The couple has barely been married more than six months, and the rumors are already flying. Brand and Perry were married in a multi-day wedding fest in India this past October following a ten-month engagement.

What do you think? Will this case turn out like Katie Holmes’? did —? with a settlement and an apology for publishing lies? We hope that Katy Perry gets her apology for being accused of cheating… and maybe those six figures.?