A brand new trailer for Harry Potter and the Deathly Hallows Part 2 has arrived. Just try and watch it without tearing up. We’ll tell you what’s in it and why it’s so incredible.

Harry Potter, the epic saga of our childhood (and for some of us, adulthood), is about to come to an end. You may think that crying your eyes out at the end of the final book was the end of it, but trust us — it wasn’t. How many times have you actually teared up at a trailer? Before you watch, I’d grab some tissues. You’ve been warned. 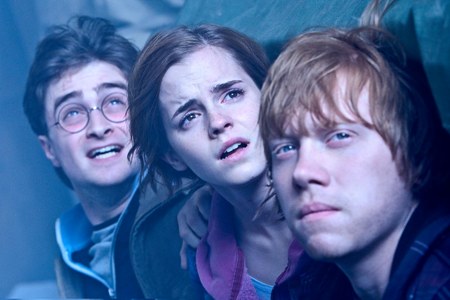 The Harry Potter and the Deathly Hallows Part 2 trailer begins with the familiar theme song, slow and broken this time. And then it begins. This is a full-on battle movie. Characters… beloved characters die.

Hogwarts is blown up. It’s really over. Now, I don’t want to spoil it for you if you are one of the four people in the world who doesn’t know what’s coming, but I’ll say this: You not only see a glimpse of someone who doesn’t make it lying on the ground, but you see what I believe is the final moment between a couple who loses their life to Voldemort.

For me, the most heart-wrenching moment in the Harry Potter and the Deathly Hallows Part 2 trailer is the fury on the face of Ron’s mother as she blasts the heck out of something. Or is it the look on Hermione’s (Emma Watson) face? Or wait… Harry (Daniel Radcliffe) throwing himself off the castle with Voldemort in his arms… you see what I’m saying? If you don’t cry when Harry says, “I never wanted any of you to die for me,” you have no soul. Watch it and commiserate below.

Check out the Harry Potter and the Deathly Hallows Part 2 trailer! >>