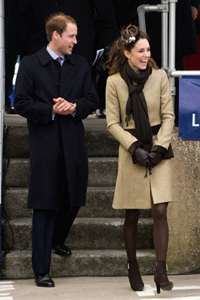 The details and designer of Kate Middleton’s wedding dress have been a tightly guarded secret at Buckingham Palace, however, as the royal wedding grows closer new details are emerging.

What is fact and what is fiction? We may not know until the royal wedding tomorrow — but here is what we know so far.

The Huffington Post’s Yvonne Yorke is reporting that Sophie Cranston of the Libelula label is the designer of Kate Middleton’s wedding dress. The princess-to-be is a fan of the designer and was recently seen wearing a Libelula velvet black dress. The identity of Cranston is reportedly being kept a secret so she can work on the dress without the pressure of the media scrutiny. Us Magazine, however, is reporting that Cranston told them it is “not true” she made the dress.

So we move on…

Or did Middleton design the dress herself? The Daily Mail is reporting that the 29-year-old designed her own wedding gown, inspired by the Renaissance period. The dress is said to be ivory, satin and lace and will include a pearl button 10-foot train, as a “nod” to Princess Di’s Emanuel wedding dress.

Middleton is said to be wearing pearl and diamond earrings, as well as borrowed jewelry from Queen Elizabeth. A back-up dress is undoubtedly being made, in case something happens to the original.

“Kate will have no more fittings,” a palace source told Us. “The next time the dress goes on is Friday morning!”

I’m willing to bet that Middleton had specific ideas on the design of her dress and incorporated some small details from Princess Di’s dress into her own. And as for the designer? I’m hoping for a modern and slightly edgy design from Alexander McQueen’s Sarah Burton.

Tell us: What do you think Kate Middleton’s wedding dress will look like?