The man who made the Mall Cop too cool for school is back to do the same for zookeepers. Kevin James stars in Zookeeper and you don’t want to miss the new trailer.

New dad Kevin James stars as Griffin Keyes, a mild-mannered zookeeper who finds himself in the most precarious of situations in the new comedy Zookeeper. The Dilemma star James plays Griffin as having no luck finding women and decides that working with animals is no way to impress a potential bride. So he decides to quit his job to find something more sexy. It is a crushing blow to the residents of the zoo. 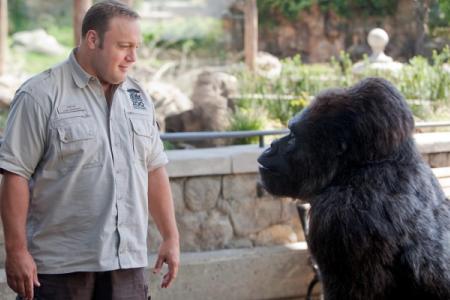 As news of their fateful leader’s imminent departure spreads across the zoo, the animals expose a centuries-held secret — they can talk — and they must use that power of persuasion to keep Kevin James from leaving their animal sanctuary.

Who better to instruct James on the ways of animal attraction than the beasts themselves?

The acting talents of Leslie Bibb and Rosario Dawson are on full display in Zookeeper along with some pretty stellar co-stars including Adam Sandler, Cher, Sylvester Stallone and Nick Nolte.

Look for Kevin James’ next film, Zookeeper, in theaters this summer! And of course, don’t miss our coverage of the film including interviews with the entire cast!