Paris Hilton’s boyfriend was attacked Wednesday while walking next to the socialite on their way to court. Just steps away from where Paris Hilton was set to face her stalker and home intruder in court, the pair became victims of a surprise attack… by another stalker. 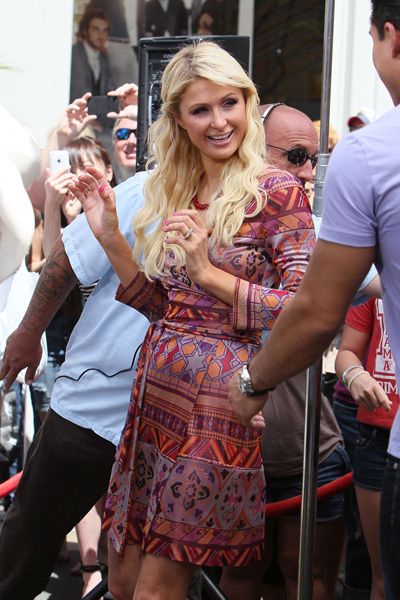 Before Paris Hilton nearly escaped an attack, the heiress tweeted, “On my way to the court house to testify against the intruder. I’m very nervous to see him face to face again.”

The man she’s referring to is Nathan Lee Parada, who was charged with attempted burglary after allegedly trying to break into the reality star’s house while carrying two large knives last August.

Upon Paris Hilton and Cy Waits’ arrival at the courthouse, the pair was allegedly assaulted. “Omg!” Paris tweeted to her mother, Kathy Hilton. “That other psycho intruder just punched Cy in the back of the head as we were walking into the court house. So scary!”

It is unclear who the “other psycho intruder” is, but it could possibly be 36-year-old James Rainford, who was arrested by LAPD for alleged battery in October 2010, after security guards confronted him banging on the front door of Paris Hilton’s home.

According to the Associated Press, an unidentified man appeared to grab Cy’s neck outside the courthouse, but was immediately seized by a bodyguard and taken away. There has been no confirmation on who the man was who allegedly attacked Cy.

After the court hearing for Nathan Lee Parada, Paris Hilton tweeted, “So creepy seeing that guy in court today, it sent shivers down my spine. Now on my way to @URM to make Mother’s Day cards with the kids.”

It’s easy to hate on Paris Hilton for her seemingly superficial nature, but this is some seriously scary stuff she’s going through! Thank goodness Cy and the bodyguards were on hand to fend off the attacker.

Here’s hoping Paris Hilton’s stalkers get what they deserve.