Don’t expect Kirstie Alley to rest her tootsies after Dancing With the Stars. The actress has received not one, but two TV offers. 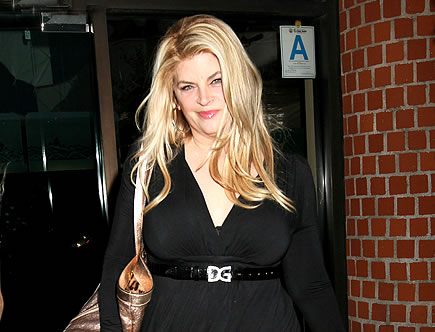 Kirstie Alley said she prefers the movies, but TV might be where the bacon’s at. Girlfriend has received two TV offers in the last month.

The Dancing With the Stars stunner told AOL TV: “I have a series being written for me right now that I really love the concept of. It’s sort of Virginia Woolf.”

Oh, stop teasing us, Kirstie! We’re not quite sure what the adjective “Virginia Woolf” connotes, but we’re thinking something along the lines of “lesbians” and “high tea.” Juuust kidding — sort of. Woolf was a famous British writer of the late 19th and early 20th centuries whom scholars postulate had strong feminist undertones to her work. Hm… how salacious for the 60-year-old actress!

Kirstie Alley might also nab a part on an HBO series. According to the former Veronica’s Closet star, an as-yet-untitled cable series is being written for her right now.

Looks like DWTS does a Kirstie good. But not so fast. “I really want my own movies,” she said. “I’m selfish, what can I say?”

Girrrl, you’ll rock it no matter what. We did love you in the Look Who’s Talking films, though.

Are you excited to see Kirstie Alley return to scripted TV?