A first look at Julianne Moore as Sarah Palin for the upcoming HBO movie Game Change has dropped — and wow, does Moore have the Palin look down! From the bangs and glasses to her smile, she may even give Tina Fey a run for her money. The political docu-drama about Senator John McCain’s 2008 presidential run also stars Ed Harris as McCain, plus Ron Livingston, Woody Harrelson, Sarah Paulson, Larry Sullivan and Melissa Farman. 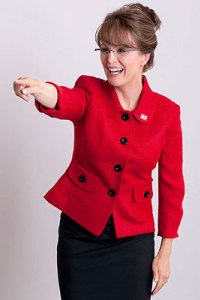 It sounded like a strange fit when HBO tapped Julianne Moore to play former Alaska Governor Sarah Palin in Game Change, but SheKnows wasn’t concerned. The Kids Are All Right Oscar-nom and 30 Rock and Children of Men star, who got her start in soaps, has already proven she can tackle just about anything.

Now, the first photo of Moore as Palin has surfaced and yup, the gorgeous 50-year-old pulls it off!

Game Change is based on John Heilemann and Mark Halperin’s bestselling book of the same name and comes from a team of HBO regulars. It’s exec produced by Tom Hanks and Gary Goetzman, who were behind Big Love and Emmy darlings The Pacific and John Adams, and also reunites director Jay Roach and writer Danny Strong, who were behind Recount, the Emmy-winning docu-drama about the 2000 presidential election.

So, what do you think: Does Julianne Moore’s Palin trump Tina Fey’s?