In case you were wondering, Daniel Radcliffe will not be attending the royal wedding. “Why [would] Americans think that?” he laughed. While Harry Potter fans wait with bated breath for tonight’s debut of the Harry Potter and the Deathly Hallows Part 2 trailer, the star of the franchise has been cracking jokes. Radcliffe made his comic debut on Late Night with Jimmy Fallon to questionable reviews. 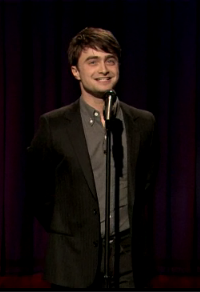 Will Daniel Radcliffe be attending the royal wedding? Heck no! And you’re silly to think so. But we’ll get to that later. First, let’s talk about Radcliffe’s comedic skills.

Nicknamed ‘Danny Radcliffe’ by host Jimmy Fallon, Radcliffe warned us it wasn’t going to be pretty. After a humorous and fumbling introduction, the Harry Potter and the Deathly Hallows Part 2 star made his comic debut with this stunning one liner:

“How do you kill a circus?

“Go for the juggler. Hey hey!“

Aside from the fact that most toddlers have jokes that good, Danny Radcliffe did a fine job! We can’t help but think he’s adorable, no matter what he says. C’mon he’s Harry Potter! Speaking of…

Want to catch the first peek at the latest Harry Potter trailer? ABC Family will air the clip for the first time on Wednesday night during their showing of Happy Gilmore. The trailer, touted as more thrilling than anything yet released, is said to include:

How about that royal wedding?

Daniel Radcliffe will not be attending the royal wedding of Prince William and Kate Middleton, and can’t quite understand why anyone would assume he would be. “Why would they invite me?” Daniel asks. “I might be English, but they don’t know me. Why do all Americans think that?”

While the royal wedding guest list includes such British celebrities as Elton John, David and Victoria Beckham, Rowan Atkinson and Guy Ritchie, the Harry Potter star won’t even be tuning in to watch the nuptials live. “I won’t be getting up at 4 a.m. to watch the wedding,” the 21-year-old said. “I’ll catch the highlights on CNN because they’ll be running something 24/7.”

“Back home apparently everyone is most excited for the four-day weekend, not the wedding,” Daniel reveals. “I am very happy for them. I wish them all the happiness in the world.”

Read on for mORE ROYAL WEDDING