Deuce Bigalow: Male Gigolo no more! Rob Schneider, who is 47, tied the knot over the weekend. His new wife, Patricia Azarcoya Arce, is a television producer. 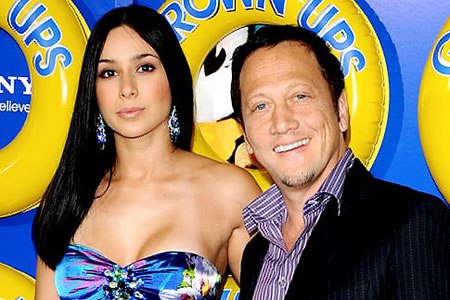 The private wedding ceremony took place on April 23rd. Schneider made a statement to Access Hollywood: “Patricia and I were surrounded by our closest friends and family; it was the happiest day of my life. We had a great time at the wedding and are looking forward to our honeymoon.”

We wonder where the newlyweds are honeymooning!

Schneider is well known for his time on Saturday Night Live, for comedies such as Deuce Bigalow: Male Gigolo and, most recently, for Grown Ups with Adam Sandler, Chris Rock, David Spade and Kevin James.

Currently, Schneider is working with CBS on an untitled comedy project based on Schneider’s life. He’s producing the series, which is about a bachelor, played by, you guessed it, Rob Schneider — who marries a Mexican-American woman. Very close to home, don’t you think?

This is Rob Schneider’s third marriage. He and his first wife, London King, have one child together.

So, what do you think? Is the third time a charm for the actor? Will Rob Schneider’s marriage last?!