Real estate mogul (and possible presidential candidate) Donald Trump says he is the reason that President Obama released his birth certificate and is “honored” to play a role in putting the issue to rest. 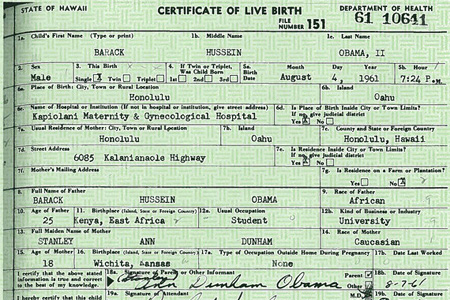 “Today I am very proud of myself because I have accomplished something that no one else has accomplished,” Trump told reporters. “He should have done it a long time ago… when the Clintons asked for it. I am really honored, frankly, to have played such a big role in hopefully, hopefully, getting rid of this issue.”

He goes on to say he wants to examine it and “hopes it’s true.”

“I’ve been puzzled at the degree this thing kept on going,” Obama said. “We have had every official — Democrat and Republican — confirm that I was born in Hawaii on August 4, 1961.”

Trump hasn’t made anything official as far as his possible presidential run in 2012, however, that didn’t stop his friends from making fun of him about it at his Comedy Central roast. “[Trump] shouldn’t be running for anything except to get a new stylist for his hair,” Lisa Lampanelli joked.