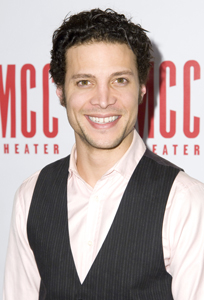 “Quite a polite fellow for waiting until late Monday, early Tuesday to make his entrance,” Guarini told People. The actor has just wrapped his run in American Idiot on Sunday night.

“With a full head of curly brown hair, wide open and alert eyes he came charging into the world.”

The baby’s name is William Neko Bell Guarini, and he weighed in at seven pounds, two ounces.

“Reina is doing wonderfully and should be given a medal for going 10 months and one week with child,” Guarini said.

“She performed beautifully and only had to push for 15-20 minutes before the babe arrived. We’re resting comfortably in the hospital and can’t wait to introduce him to his big sister (who was asleep for the whole experience) when visiting hours commence.”

Guarini narrowly lost the American Idol crown to Kelly Clarkson during the first season of the hit talent show.

William is Guarini’s first child. Capodici has a 5-year-old daughter from a previous relationship.

Do you like Justin Guarini’s choice of baby name?