Beverly Hills 90210 star Ian Ziering welcomed his first child, a girl, with wife Erin Ludwig. What did Ziering name his wittle bundle of joy? Check it out! 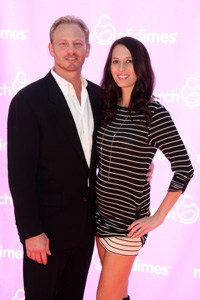 Actor Ian Ziering, who is best known as his character Steve Sanders on Beverly Hills 90210 in the 1990s, is a proud papa of a baby girl! He and his wife Erin welcomed a baby girl on Monday and her name is…

Ziering, who competed on season four of Dancing with the Stars, named his daughter a name starting with the letter “M” in honor of his late mother, Micki.

“Well, it’s official, I’m a dad!” Ziering gushed on Facebook. “As I sit holding Mia, Erin sleeps the most beautiful sleep. My thoughts race with visions of a brighter future, only made possible by what happens today… or, last night! God bless us all.”

Mia is a baby girl name of Italian origin that is the feminine version of Michal. The Latin meaning for the name Mia is “a wished for child.” Mia is a popular girl’s name that has steadily climbed the popular baby name charts. In 2005 it was the 17th most popular name and in 2009 it climbed to the 10th most popular name!

Loren is a Latin name meaning, “from the place of laurel trees” and its popularity was ranked at 970 in 2003, however has fallen off the charts since then.

Ziering, 47, and Ludwig have been married since last year. He was also married to actress Nikki Schielir for five years.

Tell us: What do you think of Ian Ziering’s baby name, Mia Loren?

Check out our pick of the top celebrity baby girl names >>>