British punk rocker Poly Styrene has died at the age of 53. The X-Rey Spex singer passed away after a battle with cancer. 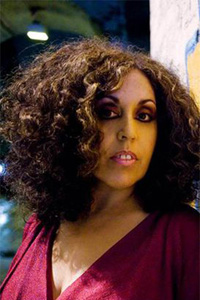 Poly Styrene, a British punk rock pioneer known for her songs Oh Bondage, Up Yours!, Identity and The Day The World Turned Day-Glo with her band X-Ray Spex, has died.

The 53-year-old was diagnosed with breast cancer and was admitted to a hospice in East Sussex, England, before she passed away on Monday evening. The cancer had spread to her lungs and spine before it was diagnosed.

“We can confirm that the beautiful Poly Styrene, who has been a true fighter, won her battle on Monday evening to go to higher places,” a statement read on her website.

Her X-Ray Spex bandmates also made a statement mourning the loss of Styrene. “She will be sadly missed by her mother, daughter, friends and, not least, her fans. R.I.P. Poly.”

Poly Styrene was born Marianne Elliot-Said and formed her band after being inspired by a performance of the Sex Pistols. Styrene, who is half-Somali, ran away from home at age 15 and was often seen in publicity shots in the 1970’s smiling with braces on her teeth.

Her band released the debut album Germ-Free Adolescents in 1978 and split up shortly after that. She recorded a solo album in 1980 called Translucence – and then faded from the public eye as she joined the Hare Krishnas.

Many celebrities, including Boy George, are expressing their condolences. “I was a fan of Poly before I got to know her, she was a Krishna follower too, oh bless you Polly you will be missed! Legend!” Boy George tweeted.