Michael Douglas opened up about his bout with cancer and wife Catherine Zeta Jones’ bipolar diagnosis on Oprah. And he ain’t happy with his wife’s confession.

Michael Douglas recently sat down with Oprah to discuss everything from his battle with throat cancer to his wife, Catherine Zeta-Jones’s, struggle with bipolar disorder. Listed as a “No Holds Barred” interview, we catch his sadness at Zeta-Jones’s illness — and frustration it became public. 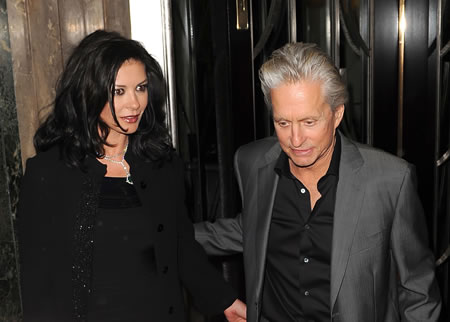 “My oldest son is in federal prison, my ex-wife is suing me, and I got cancer. It’s kind of hard for the wife to say, ‘I’m depressed.'”

The son in prison is Cameron Douglas, who was sentenced to five years in prison in April 2010 for drug trafficking. Michael Douglas’ ex-wife adds to the mix of family stress by seeking a huge financial payout for Douglas’s role in Wall Street 2: Money Never Sleeps. We can see his point.

Anger at the media

Michael Douglas’ frustration at his wife’s bipolar diagnosis stems from the public scrutiny surrounding Zeta-Jones’ treatment. “She was outed,” he said, referring to her statement released to the press when news broke she was at a mental health treatment facility.

While Douglas may be upset Zeta-Jones admitted her bipolar diagnosis under the glare of public scrutiny, he ended the discussion on a positive and supportive note. “It takes a lot of courage to seek help and I am proud of Catherine for doing something positive about her situation,” he said. “It’s onwards and upwards for us.”