The King of Queens star Kevin James and his wife Steffiana de la Cruz welcomed their third child and first son on Easter Sunday. Find out the unique and cool baby boy name they picked and the meaning behind it. 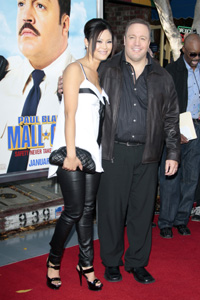 Kevin James and his wife Steffiana are the proud parents of a baby boy. And they named him…

Celebs never fail to deliver some of the most unique baby names. We think it’s hella cool!

What does it mean?

Kannon is baby boy name of Japanese origin and is another form of the name Kuan-yin, who was a Chinese Buddhist deity of mercy. The name is certainly unique, as the Social Security Administration does not have it listed in the top 1000 most popular boy names in the last 20 years! The alternate spelling of Cannon is listed at number 623 in popularity for the year 2009.

The middle name Valentine is a name of English origin that means “strong.” It is a variant of Valentinus which is the name of more than 50 saints and three Roman emperors. Valentine is named after Kevin James’ late father, Joseph Valentine Knipfing, but it was also the last name of his character (Larry Valentine) in the movie I Now Pronounce You Chuck and Larry.

Kannon will be welcomed home by his big sisters, 3-year-old Shea (who is named after Shea Stadium) and 5-year-old Sienna-Marrie.

It is interesting to note that the daughters’ names start with the letter “s,” like mom Steffiana, and his son’s name starts with the letter “k,” like Kevin’s name! What a fun baby name tradition!

Tell us:  What do you think of the name Kannon Valentine?