Is Ryan Phillippe quitting acting? A statement he made to Page Six sure made it sound so. 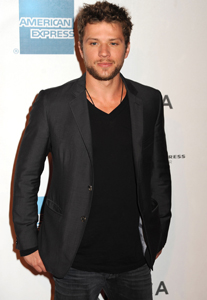 Ryan Phillippe is tired of all the attention that comes from a life lived in front of the lights and cameras of Hollywood.

The actor, who is often the subject of tabloid fodder because he can’t keep it in his pants, said he’d rather be behind the scenes.

And then the kicker: “I think I’m going to end my acting career. I’m so introverted. I’m ready to be behind the scenes. I’m 36, but I’ve been doing this for 20 years.”

Phillippe’s spokesperson promptly freaked out and denied the conversation ever happened.

“He’s been talking about expanding his talents to producing and directing, but he has no plans to stop acting nor did he ever say that he was considering doing so,” the spokesperson told Access Hollywood.

Actually, that’s exactly what he said. “I think I’m going to end my acting career.” See?

Regardless, Phillippe has five movies coming out in the next two years, so we’ll still be seeing him for a while yet.

read on for more ryan phillippe: