Kristin Cavallari is engaged to Jay Cutler! The big news for The Hills star and the Chicago Bears quarterback comes on the heels of a romantic trip to Cabo San Lucas.

In January Kristin Cavallari declared, “I’m in love!” and it seems her sentiments for boyfriend Jay Cutler were anything but one-sided. The 27-year-old NFL quarterback whisked the 24-year-old reality star away to Cabo San Lucas last weekend, where he asked her to marry him. 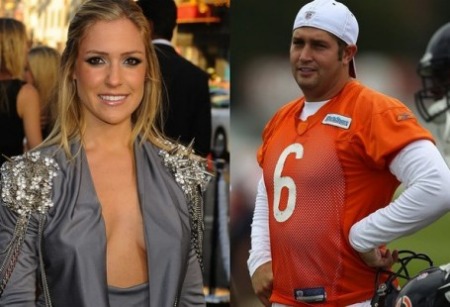 A source described as close to the couple has confirmed the news, telling People, “He surprised her with a quick trip to Cabo to ask her to marry him.”

Speaking of their relationship, Kristin Cavallari said in January, “Things are really good. I’m just enjoying my personal life and taking a little time away from the public eye, which is why Chicago is great for me. My mom and that whole side of the family is there. And Jay is there. It’s nice to be able to hang out with my mom, and, you know, I’m in love and it’s been great.”

Who is Jay Cutler?

So just who is this Jay Cutler of the Bears? Here’s a look at 10 quick facts about the future husband of Kristin Cavallari:

Well, you know what? We’re happy to hear of Jay and Kristin’s engagement. Congratulations ya’ll!