Lindsay Lohan’s four months of jail time and community service aren’t going to be a cakewalk. Details of the fallen party girl’s duties have been revealed and it looks like Lindsay Lohan is going to spend a fair amount of time in the morgue and scrubbing toilets. 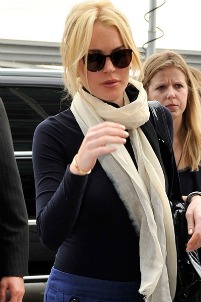 Is Lindsay Lohan coming to a toilet near you? Along with the four months of jail time, Lohan is required to complete 480 hours of community service. Los Angeles Judge Stephanie Sautner has insisted that Lindsay hop to it and get started immediately!

Of her total 480 hours, 360 are to be spent helping the homeless at the Downtown Women’s Center, while the remaining 120 hours will be spent doing janitorial chores at the L.A. County Coroner’s. That’s right, Lindsay will be scrubbing toilets amongst the deceased!

At the women’s shelter, an assignment that Judge Sautner hopes will help Linsday “see women who are truly needy and might change behavior,” the actress will have a number of ways to spend her time. Options include sorting through food and clothing donations, cooking meals, answering phones, teaching a garden workshop, going to the local farmer’s market and picking up donated food and/or working at the front desk.

Perhaps Lindsay Lohan has a secret green thumb to share?

As for the more disturbing side of her sentence, Assistant Chief coroner Ed Winter tells E! News, “She’ll be doing community service, janitorial and maintenance work, mainly cleaning the bathrooms, vacuuming and a little everything. She won’t be touching bodies but she’ll likely see them.”

Creeptastic! Would you be comfortable working in a morgue?

What do you think are the odds that Lindsay’s toilet duties will set her straight?

CELEBRITIES IN TROUBLE WITH THE LAW: