First Lady Michelle Obama had a close call when her plane missed colliding with a military cargo jet by a distance that was too close for comfort, the National Transportation Safety Board announced.

Michelle Obama was in an airplane with Dr. Jill Biden, the wife of Vice President Joe Biden, headed toward Andrews Air Base outside of Washington when it came within 2.94 miles of a military plane. 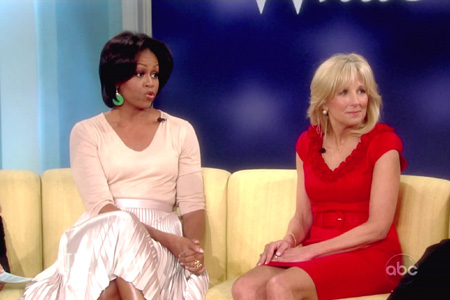 That sounds like a safe enough distance, however federal regulations require five miles between planes to avoid “wake turbulence” — especially when the plane ahead is larger than the one behind. The speed at which airplanes travel means they could easily travel over 2 miles in a very short amount of time.

The Federal Aviation Administration had first announced that the distance was at a safe distance and the planes were “never in any danger,” however once they realized how close the two planes really were they were concerned.

Upon realizing this, the Andrews controllers instructed the plane carrying Michelle to turn to distance itself further from the 200-ton C17 military plane, however it didn’t work and the planes continued to get closer. Can you imagine the stress level of those controllers?

The controllers then instructed Michelle’s plane to abort landing and circle around until the military plane had cleared the runway. No word on if the First Lady knew what was going on during this time.

The National Transportation Safety Board is investigating this incident and the FAA said they may have a supervisor stand over the controller when handling flights with the first lady or vice president, as they do on a regular basis with presidential flights.