Prince William and Kate Middleton may be getting married April 29 in what many are calling the wedding of the century, yet we have another wedding on the mind. At the center of the new film Bridesmaids, out May 13, Maya Rudolph’s character is walking down the aisle and with the cast of characters that are her Bridesmaids, we’ll be pining for an invitation to that soiree any day of the week.

SheKnows is proud to partner with five other sites to premiere the Bridesmaids character one-sheets. In our opinion, we get the most delicious of the Bridesmaids, Rita. Rita is a mother to three boys and married to an insatiable husband. When she learns that her cousin is getting married, her thoughts immediately turn to, you guessed it: The bachelorette party. 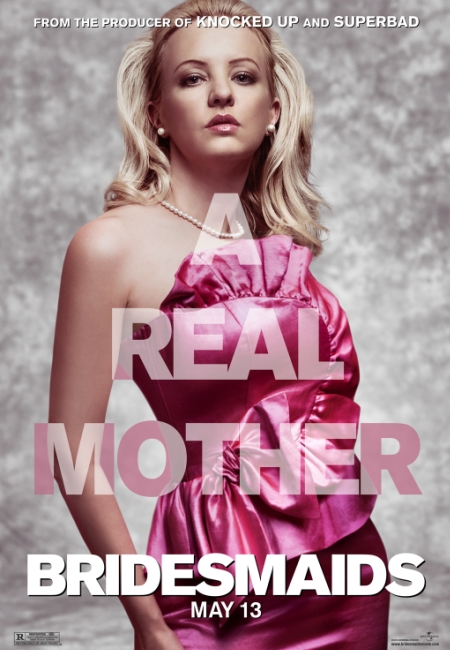 You know what else has us excited for the Bridesmaids wedding over that little fete going on in London, the redband trailer that will be premiering this evening on MySpace.

Wonder why all this SheKnows excitement over this film? First, we visited the set last summer and found the cast and crew an utter delight (Check out links to all of our set visit coverage below). Also, we have seen the movie, and although we cannot tell you too much, know this: It is the funniest film we have seen in a decade. When presented the opportunity to premiere a character poster, particularly Rita’s, we leapt at the opportunity to be among a select group to get the word out about this fantastic film.

In Bridesmaids, Rita is portrayed by Wendi McLendon-Covey of Reno 911 fame, and steals every scene she’s in. Her character is a hard-working mom, managing to balance keeping her husband happy while raising three boys and attempting to have a life of her own as well. And like we said before, no one in this group of Bridesmaids is more excited for the bachelorette party and that is one character we can get behind fully!

Read on for more Bridesmaids