La Toya Jackson was fired from Celebrity Apprentice after her group failed to impress with their task of creating a four-page ad for the Trump Hotel Collection. 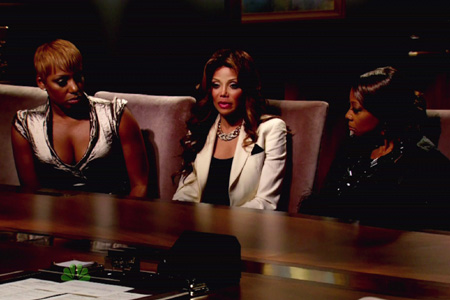 Star Jones led the women’s group, however their brochure came across as “cluttered” and “cheesy” while the men’s “Live the Life” concept, led by John Rich, won the challenge.

Real Housewives of Atlanta star NeNe Leakes and Jackson argued throughout the task before making up before the end of the show – however that didn’t stop Leakes and Jones from throwing Jackson under the bus in the boardroom.

Jackson revealed she, along with many others, has a hard time tolerating Star Jones. “I think everybody has a hard time with Star. I really do. OK, I don’t want to say anything really bad. OK, she’s mean… because I always say, if I had lost that much weight I would have been so happy and pleased with myself. It’s something inside that’s hurting her to react that way to everyone… just put a smile on your face sometimes!”

Tell us: Should La Toya have been fired? Who do you want to win Celebrity Apprentice?