Many think that reality TV started in 1992 with MTV’s Real World, however the first reality show was actually in 1973 with the PBS show An American Family. Diane Lane stars in HBO’s Cinema Verite about the family who made their private family life a public affair.

Long before the reality shows Jon & Kate Plus 8, The Jersey Shore or Teen Mom, there was An American Family. Diane Lane, who was recently cast in Superman, stars in the HBO film Cinema Verite (premiered Saturday at 9pm) about the first reality television show that aired back in the ’70s. 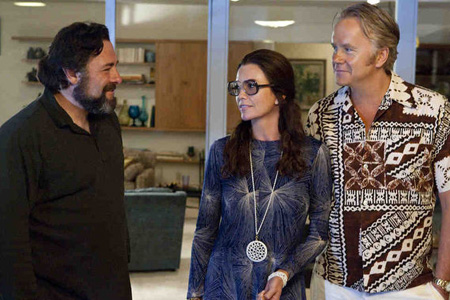 The original show followed Pat and Bill Loud and their day-to-day life with five children —  and American audiences saw in 12 episodes the collapse of their marriage, as well as their son coming out as gay,  causing much controversy among viewers.

Lane plays the wife Pat Loud, with Tim Robbins as the husband Bill Loud and James Gandolfini as the producer of the reality show. Cinema Verite is directed by Shari Springer Berman and Robert Pulcini and shows the behind-the-scenes story of the first reality TV family and how the show changed their life.

Even though Lane is playing a reality show wife on TV, she confessed she never actually watches it.

“I’m not on my high horse — I really just don’t have the time. I will flick channels if I am in front of the TV,” she said in an interview with New York Magazine. “I will have shows that I watch, but not reality shows. There are too many channels and only so many minutes to live. And ever since Princess Diana and Dodi were being following by the paparazzi, before the tragic end of their lives, I decided I didn’t want to put any weight on that side of the scale in terms of my attention.”

Tell us: Did you watch Cinema Verite?