Lindsay Lohan was upset and surprised by the 120-day jail sentence she was given for her jewelry theft case. Do you think Lohan is being made an example of – or does she think she deserves special treatment? 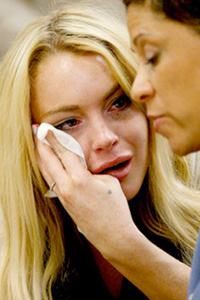 Lindsay Lohan was caught off guard and was not expecting any jail time when the judge announced her sentence on Friday, say sources connected to the troubled actress. She spent less than four hours in the Los Angeles County jail before posting $75,000 bail on Friday. Lohan was found in violation of probation for stealing a $2,500 necklace and sentenced to 120 hours of jail time, as well as 480 hours of community service.

“She is fine. Obviously she is upset about [the sentence],” producer Nathan Folks, a friend of Lohan, told People.

He said she saw the sentence as a “setback” and was caught off-guard because she has “been working so hard on turning her life around,” says Folks.

This statement begs the question – why did Lohan steal the necklace in the first place if she is trying to turn her life around? Does she like the attention she gets from all of this?

Dr. Drew recently told Extrathat he believes she is clean and sober, however in regards to the jewelry theft case: “Do I believe she’s never going to tell another lie? No. Do I believe she is trying to be rigorously honest? Yes.”

Lohan has just landed the role as Kim Gotti (John Gotti Jr.’s wife) in an upcoming movie about mobster John Gotti. No word yet how her new sentence will affect her upcoming role, however she tweeted on Friday: “I am just grateful for the life i have, i cannot explain how excited i am to begin working on films again, on top of that- i better get one of my two favorite scripts that i am in love with. my friends know what they both are.”

Lohan is free on bail until her trial starts back up on June 3rd. “She is ready to do her time. She wants to go to A.A. and N.A. and to serve her [more than] 400 hours [of community service],” Folks reveals. “She has already been doing lots of charity work.”

Do you think Lindsay Lohan deserves to be angry about her 120-day jail sentence?