Royal wedding week is upon us — which celebs are on tap to attend the nuptials of Prince William and Kate Middleton on April 29?

Royal wedding week is underway in the U.K. and the excitement is palpable. I’m here in London to take in all the glitz and glamour and bring it back to you. Preparations are well underway and women all over Britain are working on their royal outfits and plans. 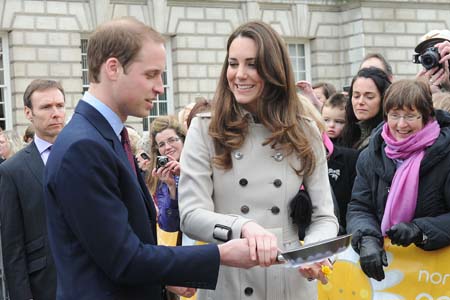 “People think Brits don’t care about the royal wedding. That’s just not true,” one British man, Dave Weatherstone, told me. He wasn’t kidding – all newspapers and television programs are dedicated to the royal wedding.

Wedding talk is dominating all conversations too – Friday is a bank holiday, so most workers get the day off to enjoy the wedding festivities. Many Brits are planning their own wedding parties complete with hair fascinators (hair adornments) and delicious foods.

Meanwhile, British press has revealed which celebs are donning their royal best as guests at the royal wedding. Who made the cut?

Rowan Atkinson – better known as Mr. Bean – is a close personal friend of Prince Charles and Prince William – so of course he’ll be at Westminster Abbey on April 29.

The unofficial Prince and Princess of Britain, David Beckham and Victoria Beckham, are invited to the royal wedding. The L.A. Galaxy player will then turn around and head back to the U.S. for a match two days later.

“I’ll go to the wedding on Friday and then I’ll fly out of London straight to Dallas on Saturday morning,” Beckham told the U.K. Daily Mail. “I’m used to the travel. It’ll be down to the manager to see how I feel on the day of the game and I’ll do everything right and do everything that is best for the team.”

“Obviously, it’s not ideal with the travel, but it’s a royal wedding and those don’t come around very often,” Beckham said.

Director Guy Richie is also on the royal wedding guest list – he’s listed as a “close personal friend of Prince William and Kate Middleton.” Like all guests, Richie will be able to bring someone to join him.

“Individuals listed above who are married or in civil partnerships have been invited with their spouse or partner,” a royal wedding press release said.

Soul singer Joss Stone is on the royal wedding guest list too. Seems off, right? Apparently Stone got to know Wills and Kate during various benefit concerts over the years.

What are you most looking forward to with the royal wedding?