Lindsay Lohan is already out of jail after posting a hefty bail sum. The actress served less than five hours of a 120-day sentence. 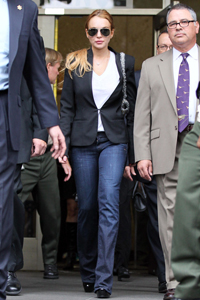 Lindsay Lohan was sentenced to 120 days in jail today for violating parole, but the actress is already out on bail after spending less than five hours behind bars!

A judge ruled that Lohan was guilty of violating her parole because she of that pesky little necklace shoplifting issue (more on that in a second). Under California law, if you are on parole and charged with a crime, you are in violation of parole — even before you go to trial in the case to prove your guilt or innocence.

Lindsay posted $75,000 bail through a bondsman she must keep on speed dial, and walked out of her home away from home — Lynwood Correctional Facility — to spend the night in the comfort of her own beachfront bed.

In another victory for Lohan, the same judge ruled that the great necklace caper is not a felony, because the piece of jewelry is worth less than $950. Although the store accusing Lohan of the theft priced it at $2500, they purchased the piece from the designer for $850. Lindsay will be charged with a misdemeanor instead, which carried a potential sentence of one year in jail, as opposed to the three years she was facing.