Jeremy Renner has been offered the lead role in the newest Bourne film. But he’s not playing Jason Bourne! 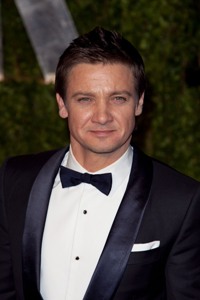 Jeremy Renner is riding high lately. He was nominated for an Oscar for his roles in both The Hurt Locker and The Town.

Renner is about to appear as Clint Barton-Hawkeye in Thor, a role he’ll reprise in The Avengers. He’s got Mission Impossible: Ghost Protocol and Hansel and Gretel: Witch Hunters on the horizon.

And now he’ll be replacing Matt Damon in the next chapter in the Bourne series, The Bourne Legacy.

The film will be directed by Tony Gilroy, who helmed the other three films. Deadline is reporting that Renner will not be replacing Matt Damon (though he won’t appear in the film. Instead, he’ll “play an operative from a covert government program that is even more dangerous than the Treadstone brainwashing program that hatched Bourne.”)

So, what do you think of Renner’s casting? Do you think three was enough? Let us know below.