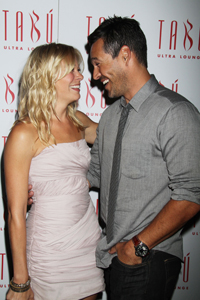 LeAnn Rimes and Eddie Cibrian married on Friday night in a ceremony kept secret from their guests until the last minute.

The couple told the 40 guests that they were throwing an engagement party at a private home in L.A. Surprise!

“LeAnn and Eddie were happily married today surrounded by their closest family and friends,” confirmed a rep for Rimes. “They thank everyone for their well wishes.”

Normally a prolific Twitterer, today was no exception for the country crooner — LeAnn racked up 17 tweets today, none directly referencing her surprise nuptials. She did, however, post a link to her horoscope which contained this little gem:

“Life becomes more complicated if someone throws you a curve ball by inviting you to do something special. Your tendency is to say no, but it’s a smart idea to take a chance and say yes.”

The couple announced their engagement right after Christmas after months of rumors.

At her wedding, LeAnn wore a Reem Acra gown which we will probably see in next week’s edition of one tabloid or another, along with all her other speshul preshush wedding moments.

Among the guest list were Eddie’s two sons, seven-year-old Mason and four-year-old Jake. Presumably not in attendance was Eddie’s scorned ex-wife Brandi Glanville, who despite supposedly having a truce with LeAnn probably would not relish the site of watching the man she was married to for nine years walk down the aisle with the woman who stole him away.