Lindsay Lohan was about to have a career upswing with her role in the John Gotti movie, but now that is questionable because she was just sentenced to 120 days in jail. Lohan was found guilty of violating her probation by stealing a necklace from a Venice, California jeweler. 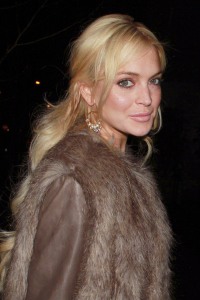 Lindsay Lohan was taken into custody this Good Friday for a violation of her drunk driving probation that she was oh-so-close to being free of its restraint. Los Angeles Superior Court Judge Stephanie Sautner tacked on a community service sentence of which 360 hours must be completed at a downtown Los Angeles women’s center.

Throughout the probation process with Lindsay Lohan, Judge Sautner has been less than patient with the former child star, often telling her how close she was to going back to jail.

Apparently, the jewelry store stealing mess was the straw that broke the camel’s back. The other part of her community service: 120 hours at the Los Angeles County Morgue. Told you she was tired of Lohan’s shenanigans.

Lohan is set to return to court on May 11 for a hearing and then on June 3 for a full trial. The only good news to come out of this entire court episode for Lohan is the jewelry incident charge has been reduced to a misdemeanor from a felony charge, which would have garnered much more jail time.

Stay tuned for more details on the Lohan jailing as they emerge.