Mel Gibson is finally breaking his silence over those awful tapes in which he said all kinds of foul things to his baby mama, and he discusses his DUI. 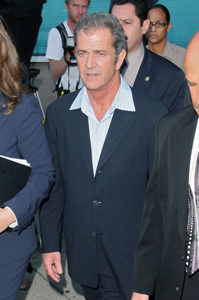 In an extensive interview with DeadlineHollywood.com, Mel Gibson talks about those terrible tapes in which he goes off on baby mama Oksana Grigorieva, and finally breaks his silence on his divorce (hint: His DUI was the last straw).

“It’s one terribly awful moment in time, said to one person in the span of one day, and doesn’t represent what I truly believe or how I’ve treated people my entire life,” Mel said of the tapes.

“I’ve never treated anyone badly or in a discriminatory way based on their gender, race, religion or sexuality — period. I don’t blame some people for thinking that though, from the garbage they heard on those leaked tapes, which have been edited. You have to put it all in the proper context of being in an irrationally, heated discussion at the height of a breakdown, trying to get out of a really unhealthy relationship.”

Hmmm. It’s a somewhat compelling argument. We’ve all said things we didn’t mean in the heat of the moment. Usually, one hopes, those things aren’t as incredibly foul as what came out of Mel’s mouth.

Mel also says he isn’t all that bothered about being dumped from The Hangover 2 after the cast turned on him.

“I sat here and talked to [director] Todd [Phillips] about it,” he said. “I like Todd. How could you not like Todd? He’s smart and he’s gifted and so are the other people in the film. It’s okay. You just have to let that go. You just move on and go, ‘Okay.’ I’m not greatly offended by it. It seemed like a good idea at the time and it went south.”

Gibson also confirmed that his wife left him the day after his infamous DUI, although it was another year before he went public with the divorce — and then only because Oksana was pregnant. That, however, is one thing he doesn’t want to talk about.

“It’s nobody’s business, my separation, my divorce, any of that stuff. It’s out there, okay, so it happened. As to the details, I have precious little to keep to myself. And if I can even hold on to even painful things for myself, so be it.”