The Vampire Diaries gave us what we wanted this week — Klaus! Not only did we get the scoop on Klaus, we got a face to put with the name! Let’s just say he’s pretty easy on the eyes.

Because there are so many new rules to the game on The Vampire Diaries, we’ve taken the liberty of pulling out the biggest pieces to the puzzle. Read on to find out what you need to know going into the last episodes of the season. 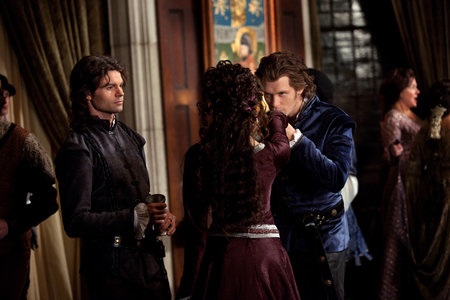 Up until now we’ve only scratched the surface of who Klaus (Joseph Morgan) is and was. His name has been a black cloud of mystery hanging over Mystic Falls for months — but we only knew half the story. The original vampire has a story and it changed everything this week.

TVD: Getting to know the Klaus, Elijah and Katherine connection

Elijah, back from his slumber, told Elena (also Nina Dobrev) the long overdue details of how the vampire trio met. It changed the whole idea of what we believed Klaus to be. Are you ready to have your mind blown? Elijah and Klaus are brothers who met Katherine in England back in 1492! One loved her and one wanted her for not so good purposes. You can figure out who was who.

We didn’t get the whole back story, but we do know their parents were human and had seven kids, who are technically “The Originals” — meaning there are five others out there, if we calculate right. Or maybe we’re just wishing more will show up.

Not only are Elijah and Klaus brothers, the sun and the moon curse is made up! Klaus made it all up so everyone would look for the doppelganger. The real curse only applies to him!

But here’s the worst part. Hybrids can’t be killed with the dagger and white ash! Only a witch can kill an original during the sacrifice. This brings us back to Bonnie. And what about the doppelganger? Elijah just might have the cure for that up his sleeve. 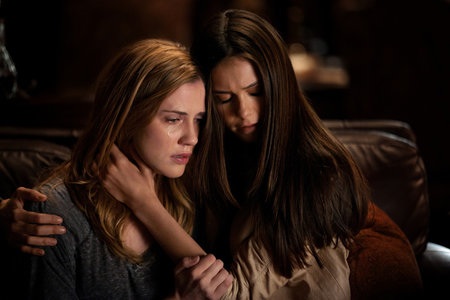 TVD: The Salvatore brothers get angry and Jenna finds out there are vampires lurking!

Damon (Ian Somerhalder) and Stefan (Paul Wesley) went to blows over Elijah’s new presence, but it was Stefan’s claim that really put the two at odds — Damon loves Elena. After a fun round of who can hit the hardest, Damon did what he does best — went to nibble on his “girlfriend” Andie Star.

In a smaller, yet very important story, Jenna found out about vampires from a very scary source — Klaus. Klaus paid Jenna a visit in Alaric’s body. He basically threatened her, forcing Stefan to show his true nature. Elena was put to the task of explaining vampires to her frightened aunt. Where they go from here remains to be seen.

You’re probably wondering what happens now. Did Klaus stay in Alaric’s body? That’s a big fat no! He and his warlock took Klaus out of Alaric’s body, leaving Alaric a pile of mush on the floor. Oh, did we mention Gretta, Dr. Jonas’ daughter is coming to town?

Stay tuned for next week’s episode of The Vampire Diaries when modern-day Klaus hits the scene! What did you think of Klaus? Wasn’t Joseph Morgan H-O-T?