Wow, the Beastie Boys have a lot of celebrity friends! Fight For Your Right Revisited, their short film, boasts more famous people than the Golden Globes. 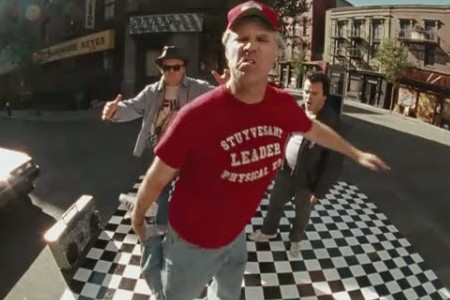 The film had its world premiere at the Sundance Film Festival this past January and premiered last night…on 4-20…ahem. Directed by Beastie Boy Adam Yauch, it follows the gang after their ’80s music video Fight For Your Right.

The boys are played by Elijah Wood, Danny McBride and Seth Rogen. The boys in the future are played by Jack Black, John C. Reilly and Will Ferrell.

The video has a bevy of stars like Susan Sarandon, Stanley Tucci (Can they please adopt me?), Will Arnett, Rainn Wilson, Jason Schwartzman, Orlando Bloom, Ted Danson…far too many to count.

The film coincides with the new Beastie Boys album Hot Sauce Committee Part Two, out May 3.

Did you watch it last night? If not, check out the trailer below and let us know how many celebs you spot!