Fat Actress star Kirstie Alley may need to change the title of her reality show after losing an impressive 60 pounds since starting Dancing With the Stars!

All that moving and grooving on Dancing With the Stars has paid off! Kirstie Alley shows off her figure in this red dress — which is a size six! The before and after pictures show the amazing difference! 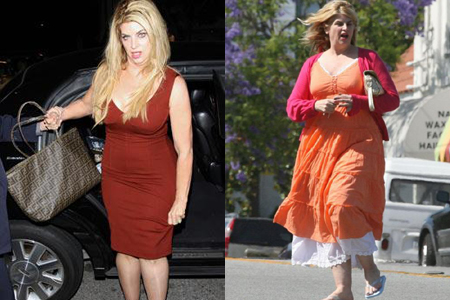 “I haven’t weighed myself in the last four weeks. I bought these dresses from a size 12 to a two. Tonight I’m a six,” Alley said. “When I’m a two, I’m done, people!”

Alley has publicly been trying to lose weight for years on various diets, however, it looks like dancing has been the trick to help her shed the pounds. Of course, her hunky dance pro partner Maksim may be motivation as well.

“Yay!!!!!! We live to dance another week!!!!!! My sex stick and I are happy!!!” Alley tweeted after they escaped elimination on Dancing With the Stars.

Alley told Us Weekly that even though she has lost weight, she is not finished yet! “I’ve lost 60 pounds, and I have 30 or 40 more to go. And I think with this strenuous, rigorous dance schedule, I think it’s going to work,” the 60-year-old actress said.

Alley isn’t the first star to lose weight on the hit dance show. Kelly Osbourne slimmed down, as did Marie Osmond who lost an impressive 31 pounds during her stint on the show. “I’ve added muscle mass and I am much more toned. It’s incredible. The show should be called ‘Dancing With the Starved!'” Osmond joked.