American Idol celebrated songs of the 21st century this week and everybody brought their A-game. But does that mean the contestants turned up their performance level? Read on to find out. 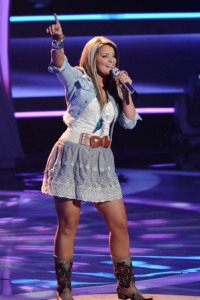 American Idol dusted off the songs of the 21st century — but there’s good news and bad news. While the contestants’ voices sounded pretty good, their performances seemed to be a bit sleepy. Now, we’re not saying they didn’t move and groove a bit, but a lot of the performances were lackluster.

Country crooners Scotty McCreery and Lauren Alaina stuck to what they do best, taking on country greats LeAnn Rimes and Sara Evans. No, that wasn’t a misprint. Scotty McCreery took on LeAnn Rimes’ Swingin and the kid made it look easy. So easy, we kind of want him to get voted off so he can just start his career already. He’s starting to get too comfortable and safe on the AI stage and the judges completely noticed it this week. Dare we say — boring?

Same with Lauren Alaina. Week after week it’s the same critique for her on American Idol. After Lauren’s rendition of Sara Evans’ Born to Fly, Jennifer Lopez basically asked her to go in a room by herself and let those high notes out no matter how terrible they sound. She just has to push herself. The two country cuties didn’t seem as powerful performance-wise like they have in the past.

AI: James Durbin, Haley Reinhart and Stefano Langone bring it for the judges

James Durbin, Haley Reinhart and Stefano Langone seemed to find themselves on the good side of the judges this week. Durbin rocked some Muse and some kick-ass gloves! Randy loved the use of his high range and said he “slayed” it! We’re a bit worried he’s so good, people might forget to vote.

Haley Reinhart took on Adele’s Rolling in the Deep and while the judges thought she nailed it, we couldn’t help but feel her growl was too reminiscent of her past performances. They’re all starting to blend together at this point. Maybe that’s her thing — her deep growly voice.

Stefano Langone tried Ne-Yo’s Closer, and you know what? It really worked! His voice fit this song perfectly and his little dance steps, while not commanding, were decent. At least we didn’t want to fall asleep on that one. Even Steven Tyler liked his little dance moves.

We’re not really sure what to say about Casey Abrams and Jacob Lusk. It’s hard to critique Abrams’ performance of Maroon 5 because he gave Jennifer Lopez a small kiss at the end and it completely took the comments in a different direction. He carried his electric guitar around the stage and gave each side of the audience some love, but he’s just so much better when he makes us swoon with his jazz voice. He may never be awful, but he’s one of those contestants that people will either love or hate, based on his song choices.

Jacob Lusk, on the other hand, sounded fantastic and brought the emotion to the table, but he didn’t do anything that special with his take on Luther Vandross’ Dance with my Father. He has to start picking it up a bit and not just rely on his big voice.

It’s getting harder and harder to find much fault with these contestants because they’re all sounding like real singers, but now we want to see real artists and performers emerge — not just a voice.

Who do you think killed it on this week’s American Idol?