TV on the Radio bassist Gerard Smith passed away Wednesday from a battle with lung cancer. He was 36. Smith’s death came only a month after he announced that he had the disease. 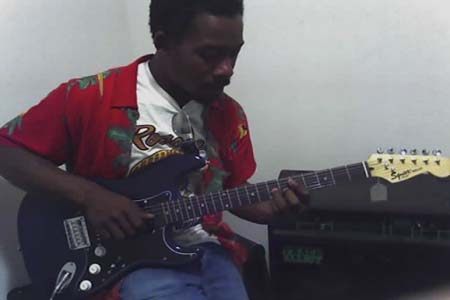 “We are very sad to announce the death of our beloved friend and bandmate, Gerard Smith, following a courageous fight against lung cancer,” the Brooklyn-based band said on their website. “We will miss him terribly.”

Smith was plucked out of his gig as a New York City subway musician to join TV on the Radio.

“What you were playing was just so far and above what was normally down there that I can’t even describe it. I was just like, that dude’s awesome,” lead singer Tunde Adebimpe told Smith during a 2010 interview with The Brooklyn Rail.

“I saw Tunde in the movie Jump Tomorrow on IFC. And I was super addicted to film at that time. A year later, I was playing on the subway platform here, at the Bedford stop, and he kept giving me money. And then I was like, I recognize this guy. Then it finally clicked, and I said, ‘Dude, you were in that movie!'” Smith said in the same interview.

Smith’s death is the latest in a string of sad deaths — Doctor Who actress Elisabeth Sladen passed away from a bout with cancer and Restrepo director Tim Hetherington, 41, was just killed while covering the civil unrest in Libya. Actor and director Tim Robbins just lost both of his parents in recent weeks to health problems.