With Steve Carell’s exit looming, Will Ferrell clocked into The Office for his four-episode storyline April 14 and returns for part two tonight, April 21. 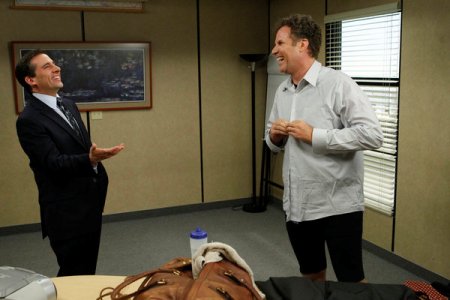 If you were one of those 7.7 million people who tuned in last week, you enjoyed quite the love fest between reunited Anchorman: The Legend of Ron Burgundy and Bewitched pals Steve Carell and Will Ferrell. As branch manager Michael (Carell) began training his replacement, Deangelo (Ferrell), the megawatt duo was clearly having a ball riffing off one another.

“It’s basically one idiot training another,” Ferrell quipped. Unfortunately, with only a four-episode promise from Ferrell, that training won’t go anywhere.

Ferrell clocked into The Office to help ease the transition of Carell’s impending exit. They’ll both stick around through the Goodbye Michael episode, which promises a few extra minutes of laughs and airs April 28 from 9 to 9:50 p.m. Ferrell will remain for one more episode after that.

The Office‘s hour-long finale on May 19 will also get the all-star beef-up, with The Office creator Ricky Gervais, funnyman Will Arnett and one or two other mystery guest stars. This news has fueled the rumors that Arnett may be Carell’s real replacement, but we’ll have to wait for confirmation on that tidbit.

The Office airs on NBC Thursdays at 9 p.m. 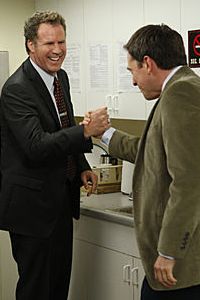 Who is Will Ferrell’s Deangelo?

The new Scranton office-chief-in-training Deangelo at first appeared to be an homage to oddball Michael, but Ferrell’s new character started to show his own colors as his premiere episode progressed. NBC.com has an entire page set up so fans can get to know Dunder Mifflin’s newest employee.

Here are some Deangelo factoids from the site: