Word of Demi Lovato’s bipolar diagnosis comes just hours after actress Catherine Zeta-Jones has gone public with her own bipolar disorder struggles. Both stars are now speaking out in hopes of helping others deal with the mental illness. 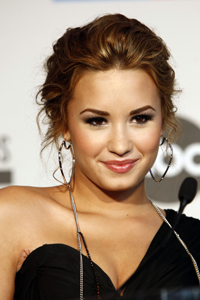 Demi Lovato’s bipolar disorder admission is the latest in a list of issues the young Disney star tackled during her stay at a treatment center. Anorexia, bulimia and cutting since age 11 are all problems the 18-year-old now proudly says she feels she can control.

“I never found out until I went into treatment that I was bipolar,” Demi Lovato has revealed to People magazine. “Looking back it makes sense. There were times when I was so manic, I was writing seven songs in one night and I’d be up until 5:30 in the morning.”

While Demi Lovato’s bipolar diagnosis was not as specific as that of Catherine Zeta-Jones, who is dealing with bipolar II disorder, Demi says that she has struggled with depression “from a very young age.” Demi showed her support for Catherine on April 14 by tweeting, “I don’t know Catherine Zeta-Jones personally but what she has decided to do is SO brave. And SO difficult but worth it… I’m proud of her.”

Treatment and diagnosis have allowed Demi Lovato to come to terms with her issues and find a new outlook on life. “I feel like I am in control now where my whole life I wasn’t in control,” she says. “What’s important for me now is to help others.”

Read on for more Demi Lovato: